Toyin Lawani, the most well-known celebrity stylist and fashion designer, has revealed something new about her personal life.

The mother of three described how a man offered her a million dollars to have his children while boasting about the talent of her three children.

Toyin claims that her womb is blessed. This is clear from the gifts that each of her children possesses.

Toyin revealed how Eleora, her third kid, would always approach her father whenever he took a picture of her and they would have a discussion.

She shocked them, though, by entering the picture booth by herself. Toyin boasted about her three children, extolling their virtues.

She revealed that a man approached her with a million-dollar offer to carry his child after noticing how blessed her womb was.

“Don’t worry it was as shocking to me as to you,
Everytime her dad took a picture she would come to him and look at it and they would have a conversation.

Then this happened. She literally went there stood and pozed by herself. It’s in her blood ooo. Well all my kids are like this. @thereallordmaine is a Fashion lord.
@therealtiannah fashion queen.

And @kingtinukeeleora the upcoming fashion Goddess.
My womb is blessed.
Now I see why one man offered me 1million dollars to have his kid for him”. 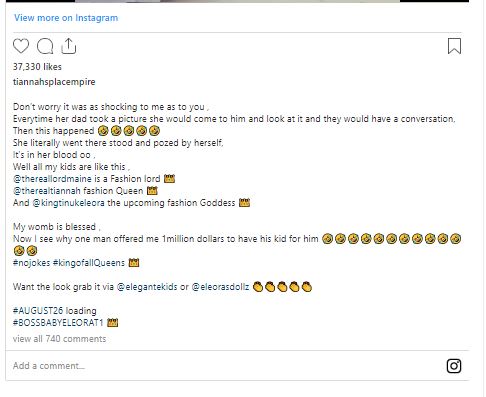 READ ALSO:  “How I Was R@ped By My Uncle At Age 15” – Popular Celebrity Stylist, Toyin Lawani
Related Topics:Toyin Lawani
Up Next