Nollywood actress,Tonto Dikeh, is now regretting how she handled two of her Fans who approached her for separate reasons.

The movie actress admitted that she handed a random fan N370,000 who needed assistance, and when she went to check on her a few days later, she had vanished into thin air.

Tonto claimed that after turning down a similar request for assistance from another fan, she eventually learned that the fan had lost her son.

She admitted that she has cried about her choice and that she is struggling with it.

She also cursed the one who had forced her to disregard the grieving mother.

Tonto wrote: “I will hate myself for a very long time, see the amount of damage one persons lies and choices have caused”. 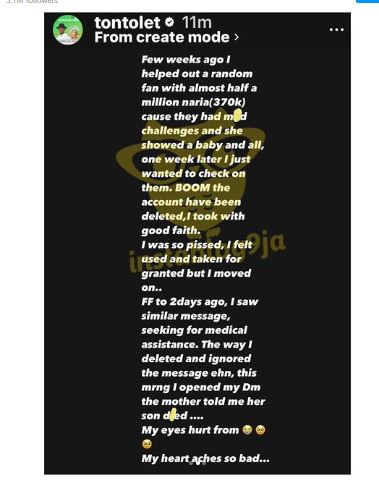 READ ALSO:  See 5 Advantages Of Having Big Breasts
Related Topics:Tonto Dikeh
Up Next

U-20 WWC: Falconets Seek To Maintain Perfect Record Against Canada

OMO!!!!! Man Reveals Why He Doesn’t Trust Women As He Shares Chat With Close Friend Who Slept With His Three Exes