Popular singer, Buju, a.k.a Bnxn, clears the air following claims of assaulting a police officer during a heated exchange.

It would be recalled that the vocalist had an encounter with police officers after which he penned a tweet about his experience.

“Spat on the police officer’s face and it felt good,” he wrote in a now-deleted tweet.

Social media, however, went agog on the disrespect to an officer in uniform which was further heightened by a journalist, David Hundeyin, who insisted on prosecution of Buju.

Clarifying his statement in a new tweet, Bnxn affirmed that it was a figure of speech rather that a literal statement.

“My since deleted tweet stating that I spat in a police officers face was an idiomatic expression to say I disrespected a police officer to his face and not the literal way people may have taken it on social media. I do not support violence or abuse against the police in any form.

See a screenshot of his tweets:- 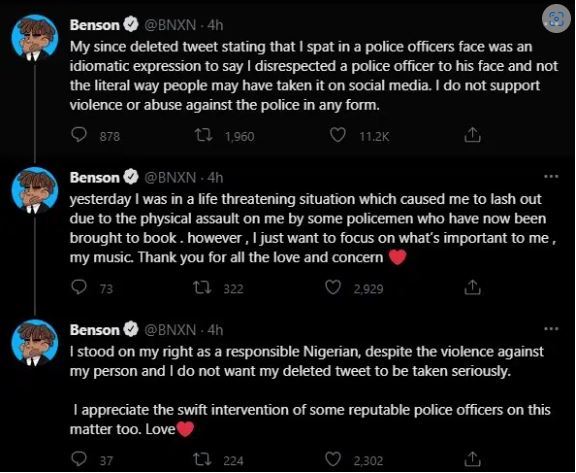 READ ALSO:  “I Am No Longer Buju” – Nigerian Singer Changes Stage Name
Related Topics:BNXNBuju
Up Next