Doyin, a housemate on the “Level Up” reality television show, has come under fire from Tacha Akide, a Big Brother Naija “pepper dem” disqualified housemate, for her remark regarding her mistreatment while inside the house.

She was the most despised contestant throughout her stay in the house because of her actions, which many people viewed as displays of pride.

Tacha ended up getting into multiple arguments with her housemates as a result, which resulted in her receiving three strikes and being eliminated.

Doyin said she now understands why Tacha was mistreated by her housemates. She said this during a talk with an ex-housemate, Amaka.

Doyin said that the Tacha was at fault for some of the events that turned her fellow Housemates against her.

The pepper dem contestant took to her story to lash out at her because this didn’t sit well with her.

“Doyin or whatever her name is should come fuck me at this point!! Girl is obsessed”. 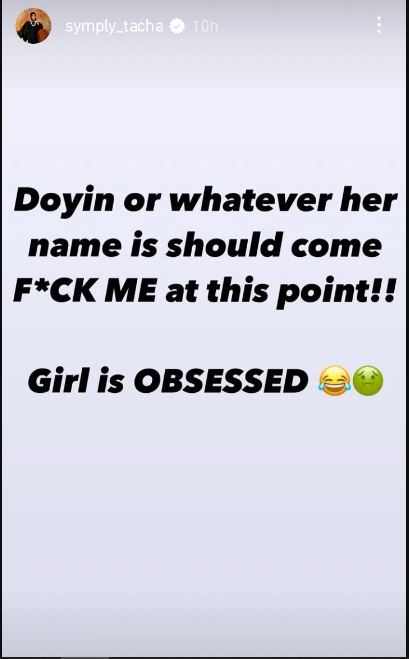